(Excerpt From Chapter 1 - Little Hell)
Infiernilios was a ghost river. It wasn’t found on Ecuadorian maps and defied definition in my Spanish dictionaries, yet was referred to by the locals as Little Hell, an ominous title that stirred the fire of the villager’s souls. They said the river tumbled from the peak of the Cordillera Manga Hurco, winding through dense jungle and steep ravines until it reached the playa, the beach. There it pushed up sandbars and slowed to a crawl allowing golden tears of the sun to lodge in rocky crevices and glisten in the noonday sun. The gold nuggets found in the Infiernilios could change the desolate lives of the small, impoverished village of Nabon into one of promise of hope. But it was a dichotomy. It could transform yesterday’s misery into tomorrow’s promise of gold but it could also leave a trail of despondency. Rio Infiernilios was a combination of heaven and hell compressed into one small tributary that was a closely guarded secret of the inhabitants in the small village of Nabon. 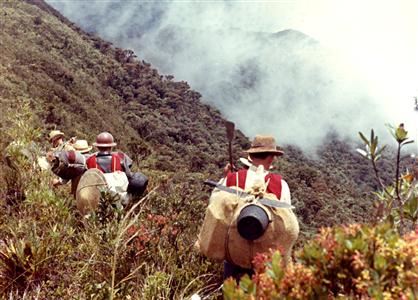 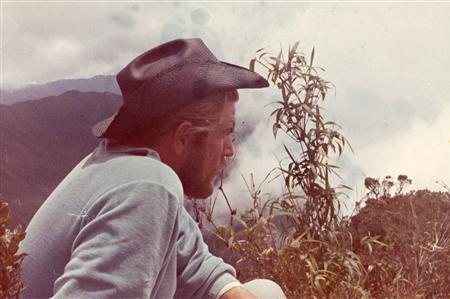 The route to the river named Hell began by wading through waist-high grasses, which was easy for my crew who lugged heavy packs. These were the high plains. There were no trails and the wind was bitterly cold but the lure of gold drew us to deeper into unexplored territory.

Three days in we found ourselves in dense jungle that slowed our progress. We hacked into the growth creating ‘tubos’ or tubes and prayed for a clearing. 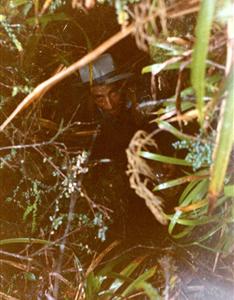 One of the men grabbed my camera and shot this picture of me taking a breather. The thick rainforest, thin air and the constant ascent and decent of high elevation mountains was taking its toll, but we knew it wouldn’t be long before we reached the mysterious, ghost river named Hell. 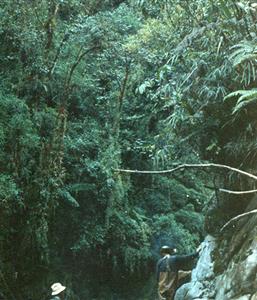 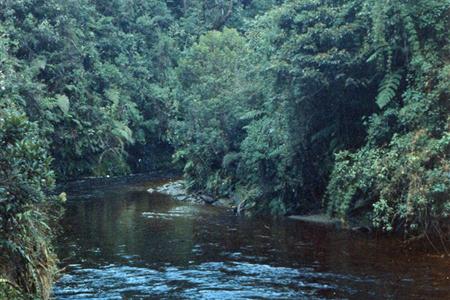 Before us lay Rio Infiernilios; the river the Canari Indians called Little Hell.  The men seemed pleased they had been responsible for bringing the first white man to this closely guarded secret… a place of incredible beauty that carried such a foreboding name.

We set camp and the men began expertly swirling their bateas (gold pans)
to see who would be the first to produce ‘tears of the sun’… gold.
In no time I heard a scream of excitement. Hell had lived up to its legend.

We could hear the river below us. One more precarious descent and we would be standing on the banks of Hell. 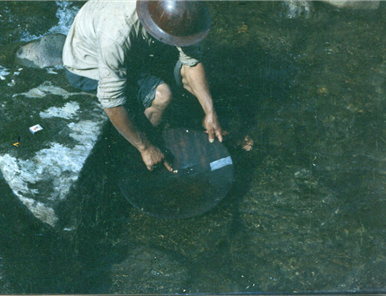 (Excerpt  from Chapter 1 – Little Hell)
It was amazing what the lure of El Dorado can do for tired and worn out bodies that ached with every motion. Not wanting to waste any daylight we barely controlled our excitement and decided to go to work immediately. The three washers unstrung the large bateas lashed to their backpacks… It was exhilarating for all who had dreamed of this moment…  For the next three hours I anxiously witnessed an amazing primitive art form. The large wooden bateas came alive with their own magical flow of movement.

Little Hell lived up to her name but we escaped with some gold and our lives. I returned to Cuenca, sent my crew their share of the profits and had a portion of my share made into a gold watch and ring by the craftsmen of the old city. The little head was a treasure I found along the way. 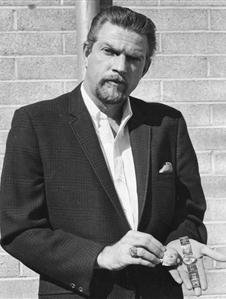 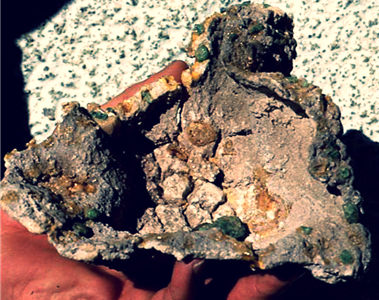 A new quest beckoned me back to Ecuador. It came in the form of the last will and testament of a man named Mejia and contained a century-old riddle to a lost treasure of emeralds. Father Carlos Crespi had found emeralds in this vast unexplored country in the Rio Tungus. How could I refuse the mystery, riddle and the sense of adventure?

Don Antonio Necta, my Shuara friend, guide, shaman and mentor. Antonio taught me about Nature's pharmacy, the predators of the rainforest, and the seen and unseen world of the Shuara. 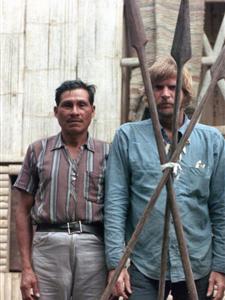 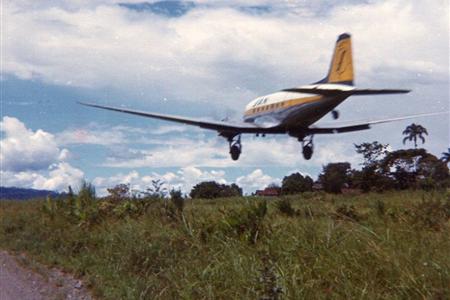 Aging DC-3s were the fastest way into the jungle, although it wasn’t the safest. I missed one flight that crashed and survived a harrowing almost crash. 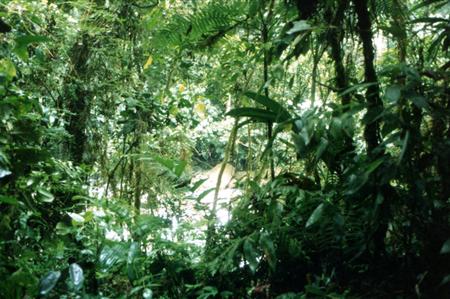 Sucua was the jump-off point for my expeditions for the Mejia green fire (emeralds). From here I headed into the jungle called the Oriente, or East. Danger lurked around every bend in the trail. This was the home to several deadly snakes, the fierce ocelot and the predatory jaguar. Plus I was in the territory of the Shuara, the legendary headhunters of the Amazon. 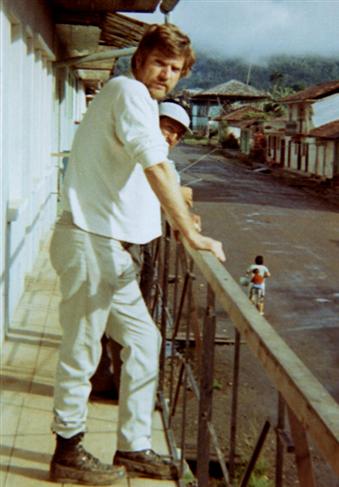 The further you go into the Oriente the denser the rainforest becomes. One of the first things I learned was that you judged your distance from civilization by the size of the leaves. The larger they were, the further you were into the jungle.

The Rio Cunguinza was one of Mejia’s clues to the green fire. Every expedition in this area included a treacherous, trail-less journey up her banks. 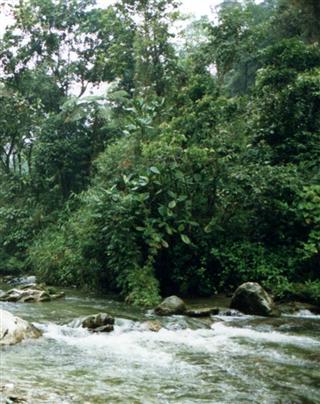 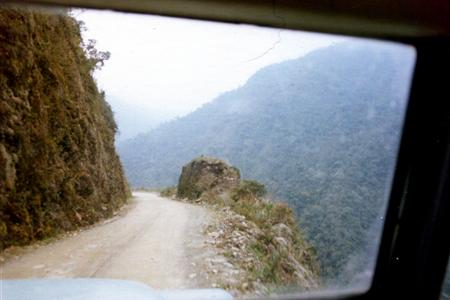 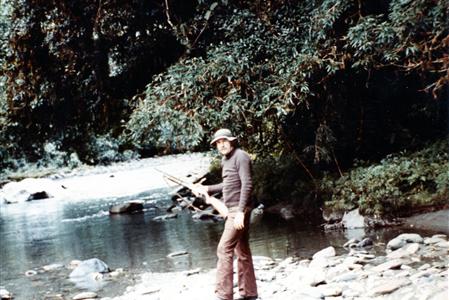 Years ago I had brought in steel cable to span the Rio Tungus. It was a pleasant surprise to see ‘Lee’s Ferry’ had been constructed. This gave us the opportunity to see what lay on the other side of the river. 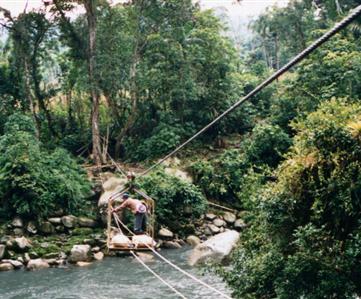 Another trip from my base in the city of Cuenca to the village of Sucua, this time by car on the new ‘highway’. The narrow road wasn’t any safer than the DC-3 flight. Once you found a car and driver (most weren’t willing to sacrifice their vehicles to the rutted roads and rotten timber bridges) you had to hope your progress wasn’t stopped by downpours, landslides, boulders, missing planks in what passed as a bridge, or a slide-off into a deep canyon.

The Cunguinza, called the Rio Santa Rosa by the colonials, was the key. It was the starting point that led to other pieces of the Mejia riddle: a landslide, a rock open in the middle… if it were only that easy. 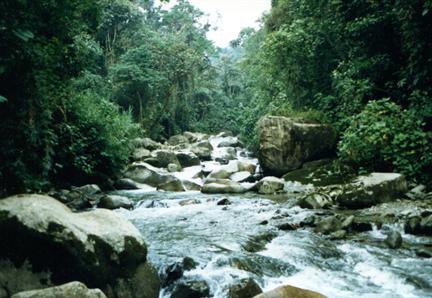 After the long drive we were ready to set out on another expedition in search of the green fire, this time on the far bank of the Tungus.

(Excerpt from Chapter 14 – Difficult Journey)
There was a nervous stir among my team. The thickness of the jungle left us defenseless as we climbed and crawled on all fours through a green maze of tangled growth. The pain was unbearable. The harness straps from my backpack cut into my shoulder blades and caused me to wince with each shift of weight. My lungs struggled with each gulp of air and my wet clothes clung to me like a thorny blackberry bush. 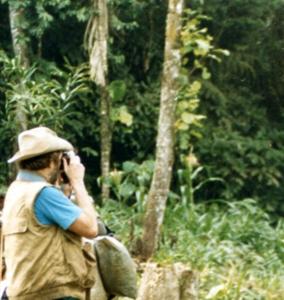 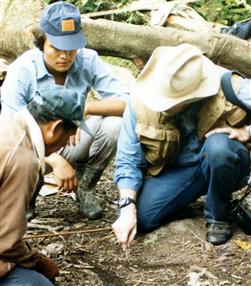 We knew Mejia’s landmarks had changed over the years so we decided to split into two groups: one would follow the bank of the river and one would climb the mountain.

The leaves were getting bigger and rainforest even denser. We were exploring new territory and there was a definite sense of apprehension. 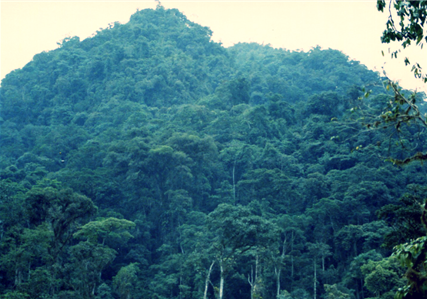 This is the Kionade, a place controlled by shaman and forest guardians, both physical and non-physical. It is a place you must seek permission to enter, both from its owner and its energy. It’s the area that produces Natema, also known as the hallucinogen ayahuasca, and place that Mejia found his precious stones.

(Excerpt from Chapter 16 – Kionade)
Kionade was a place of legends, a fascinating ensemble of raw truth and reverence. Hidden deep within this magical rainforest was a place the unta Shuara called the City of Magicians. Different from the Village of the Shaman, this mystical city was the birthplace of their tribal shamanism and they revered it as such. 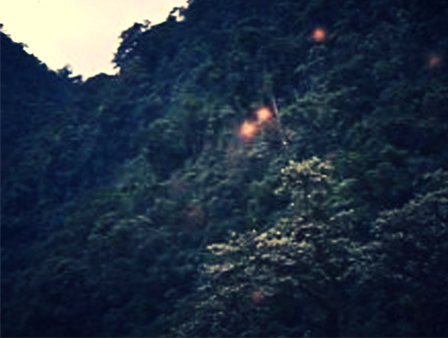 If I hadn’t seen it, I wouldn’t have believed it.  But there they were, just like Antonio had said they would be. The energy balls floated through the trees down to the far bank of the river where they seemed to acknowledge our presence before they vanished. They were only the harbinger of things to come.

(Excerpt from Chapter 16 – Kionade)
If a man wanted to exercise belief in his faith, this place had to be the ultimate chapel. The impenetrable personal privacy that we human beings believed was our spiritual first amendment was a myth here where spirits ruled and dictated one’s every move.

Wild orchids dotted the treetops that formed an archway into the Kionade. The beauty of the mysterious place belied the physical and non-physical dangers that lay ahead. 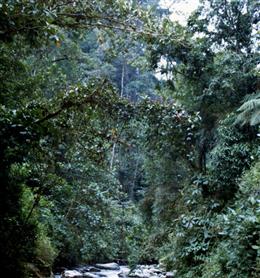 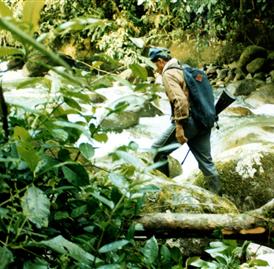 For years Don Antonio Necta had been by my side as we explored this amazing, mythical land. This trip was no different. His sight was failing and we both had a few more years on us, but neither of us had lost our sense of adventure. He was in his element. He understood both the seen and the unseen worlds that coexisted in the rainforest and in the belief structure of the Shuara. 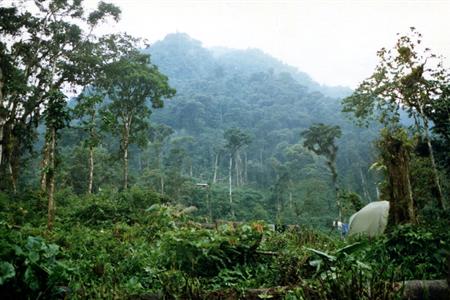 (Excerpt from Chapter 17  - Power Dance)
Beads of sweat continued to pour into my eyes. My throat was dry; it was painful to swallow. My body vibrated several octaves above normal causing a tingling sensation awakening numbness in my aching body…  I momentarily craved nicotine to calm my nerves, but knew that a match strike might bring something unwelcome into my life. I asked Necta, the Shuara shaman and my protector if the night stalkers were real flesh and blood or were they an extenuation of imagination brought on by fear. His answer was chilling. They were as real as the makeshift fort we hunkered down in and they would come for us during first light of the moon.

We decided to push upstream, but we had a new guide into this uncharted land, Marcello. His father, a respected shaman, owned the land at Kionade and granted us permission and promised safety as we explored.

(Excerpt from Chapter 19 – Iwanci)
In the past few hours my life had run the gambit from fear and uncertainty into the comfort and the safety of a spiritual experience followed by enlightenment and back to fear and uncertainty. And it had all transpired between breakfast and dinner.

We based our camp on the outskirts of reality. What was illusion and what was reality was a constant mental debate that took me to the conclusion that it was all very real in some form. 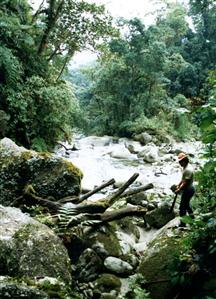 We continued up river with Marcello at point and Antonio and I close behind.

He was tall for a Shuara with chiseled facial features and a powerful presence that reflected ancient wisdom through his black eyes. We studied each other through constant eye contact and searched for some common ground. Our conversation was stilted at first but when he learned I was an American that revered his land and had returned to explore its beauty and wonderment he relaxed his grip on the machete and accepted my truth. 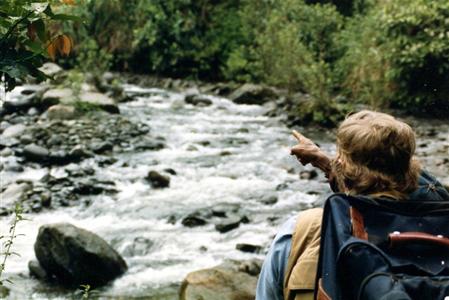 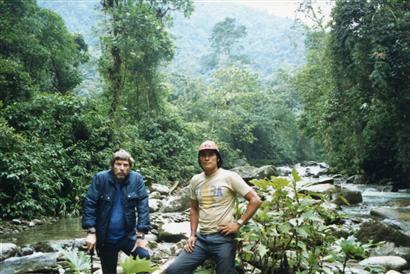 Taking a breather on the Rio Cunguinza. 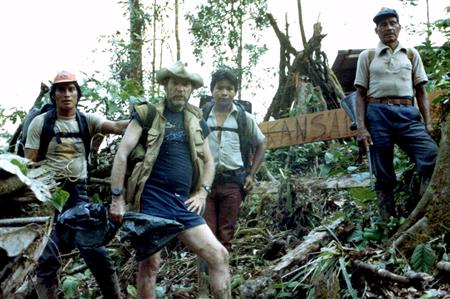 (Excerpt from Chapter 19 – Iwanci)
One of my vision quests was reached; I had the freedom to roam the Kionade without fear of reprisal from the unpredictable forest guardians. With Marcello at my side, I was reminded of my youthful exploration in the Arizona desert with the Apache Kid. How unique that my destiny’s path for adventure began with an old Apache medicine man and warrior and culminated with a young Shuara whose father was the keeper of secrets of the tribe and custodian of the sacred Kionade, the portal into the legendary City of Magicians. 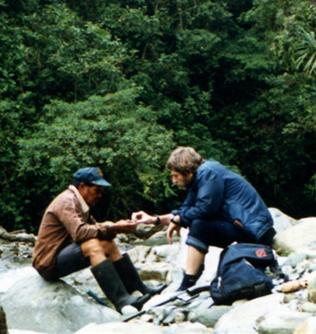 In the company of Antonio Necta, I examined mineral specimens found in the general location Mejia mentioned in his last will and testament.

Or Buy an Autographed
Hardcover Copy
View on Mobile